Create an Account - Increase your productivity, customize your experience, and engage in information you care about.

Development as a Railroad Community 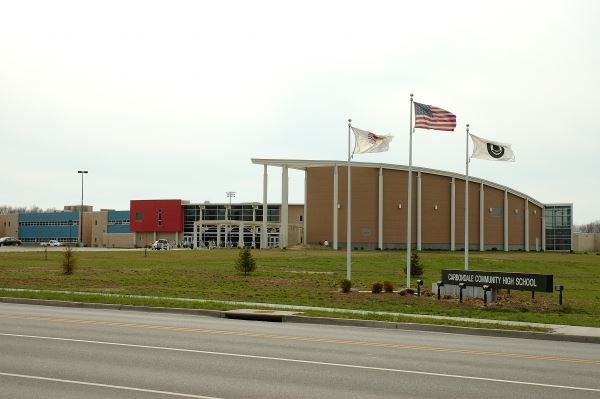 The Development of Carbondale as a Railroad Community was written by Delano Scott, a Carbondale Community High School student. It was published in 1994 in the Illinois Historical Journal.

The Development of Carbondale as a Railroad Community

In August 1852 Daniel Harmon Brush rode east from the Jackson County seat of Murphysboro, Illinois, to look for a site for a new town. A successful storekeeper, mill owner, and county official, the thirty-nine year old Brush had lived in Murphysboro since its founding in 1843. He had decided that as soon as the Illinois Central Railroad route was firmly established through Jackson County, he would relocate along the railroad in a spot that offered a reasonable prospect of doing business. The knowledge that the Illinois Central Railroad would be in business in southern Illinois within a few years led him to consider carefully how this might work to his advantage.

The land through which he rode and which later became the town of Carbondale, was still heavily wooded. Except for two farms it was also unsettled. Historian John Wright described it as "a wilderness of forest and dense undergrowth of hazel bushes, wild grape, and running rose vines." By the summer of 1852 the line of the railroad through Jackson County had been determined. It appeared evident there would be stations at Makanda and DeSoto. Following the grade stakes of the railroad, Brush came upon a mile-long stretch of elevated land where the roadbed would be straight and level, an ideal location for a town. This area also lay midway between the two proposed station sites, DeSoto and Makanda, and between two county seats, Murphysboro and Marion. Brush began thinking that he might be able to persuade the railroad to put in a station at the location. The advent of the Illinois Central Railroad was the controlling element in the site selection of Carbondale.

Before the arrival of the railroad, Illinois towns were generally laid out with streets running directly north - south and east-west, paralleling section and township lines. Brush's 360 acres formed a square aligned in the same way, but the proposed route of the Illinois Central passed through the square diagonally. Therefore all lots, streets, and alleys were laid parallel to, or at right angles with the center line of the Illinois Central Railroad.

The first big public event in Carbondale's history came on July 4, 1854. The town combined the celebration of Independence Day and the arrival of the first Illinois Central train in Carbondale.

Carbondale began to prosper but was hit hard during the Civil War, making the next decade in Carbondale's development difficult. Trade declined and the railroad put on a series of promotional programs. With the blockade of the river at Cairo, Carbondale picked up this business and thus became a major shipper of cotton. The additional trade helped sustain the town during the Civil War.

After the Civil War, many skilled workers in the building trades carpenters and masons especially came from other parts of the country, attracted by the Illinois Central Railroad's advertising. The advertising appeared in newspapers, magazines, and farm journals throughout the eastern states and in England, Scotland, Germany, Sweden, and Norway, inviting prospective settlers to come to "Illinois, the Garden State of America." Many of them came, and some of them settled in the new town of Carbondale.

A boost for Carbondale's economy during the 1870s came from its increasing importance as a transportation center, due to its location on the Illinois Central line. About 1870 the Carbondale and Shawneetown Railroad was incorporated by a group of coal operators from the east. The Carbondale-to - Marion section of this road was completed in January 1872. In addition to carrying coal from the mines near Carterville and elsewhere in Williamson County to Carbondale, it brought cotton, tobacco, and dried fruits for reshipment on the Illinois Central. In 1880 the first part of a railroad line from Carbondale to Pinckneyville was built, reaching Harrison, a town north of Murphysboro. The Pinckneyville end of the line was built about a year later. In 1883 several lines came under the control of one company, the St. Louis, Alton and Terre Haute. A building boom occurred for Carbondale in 1892. The most helpful factor was the increasing business of the Illinois Central Railroad and the increasing extent to which Carbondale was making a place for itself as a railroad center and sharing in the prosperity of the railroad. In collaboration with the Illinois Central, which supplied the main north-south route, Southern Illinois coal, grain, and other farm and industrial products began to come through Carbondale in increasing volume. That trend picked up substantially in 1895 when the Illinois Central acquired all of the feeder lines on a ninety-nine year lease, necessitating an increase in the Illinois Central's staff. New railroad families began coming into the city as fast as the housing situation would permit.

In 1899 a new roundhouse was constructed in Carbondale, adding further to the railroad's payroll in Carbondale. During the 1920s the Illinois Central prospered, and Carbondale benefited along with it. The railroad bought new equipment and made improvements. Most of the traffic increase in the 1920s was in shipping bituminous coal from southern Illinois mines and fruits and vegetables from Southern Illinois farms.

Throughout the years the economy of Carbondale followed that of the nation; certainly the Illinois Central had a major impact on that economy. Supplying ice to the railroad for refrigerated shipping became a major local business. Telephone service expanded. Southern Illinois University enrollment surged, and another housing boom began. The increased importance of Carbondale as a railroad center aided in the city's growth by providing extensive employment for local workers, attracting new residents and encouraging a wide range of new investments.

During the 1940s the railroads began to have problems as planes and trucks began to move people and products. Smaller railroads formed and many railroad towns disappeared. Carbondale, however, endured. The railroads still move products and people between Chicago and New Orleans and brings one of the greatest assets to the city that of 20,000 university students.